Once upon a time, about 900 years after the Buddha’s death, there lived a Buddhist philosopher called Asanga Bodhisattva in the country of Ayodhyā, central India. He had infinite wisdom and benevolence and compassion. At night, he ascended to Tushita Heaven to learn the teachings of Mahayana Buddhism from the Maitreya Bodhisattva and during the day, he descended to the human world to spread the knowledge for the good of humankind. 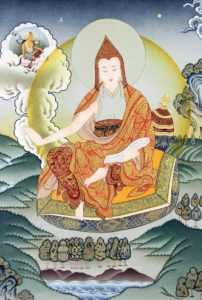 He had a younger brother philosopher, Vasubandhu Boddhisatva, who resided in Purusapura , a country in northern India. From an eastern country came Piṇḍola Bhāradvāj, a disciple of the Buddha and arahant, who bestowed upon Vasubandhu the teachings of Hinayana Buddhism. Being ignorant of Mahayana Buddhism, Vasubandhu highly valued these teachings. His older brother Asanga, who from afar observed his brother admiring Hinayana, thought he would manage to guide his brother into Mahayana. Then he asked one of his disciples to go to younger brother priest Vasubandhu to ask him to come immediately to see Asanga. Following the master’s order, the disciple reached Purusapura and then conveyed to Vasubandhu the message from his brother.

When he was about to leave following his brother’s request, in the evening, the disciple recited a Mahayana sutra called Dashabhumika (“Sutra on the 10 Stages”). Listening to the sutra, Vsasubandhu felt it to be truly profound and far beyond his understanding. “I have been so silly to have learned the teachings of Hinayana willingly, without listening to any of Mahayana’s profound teachings. The sin of defaming Mahayana must be unimaginably grave. All this resulted from my tongue, which is the root cause of the sin, and I will cut off it.” Grabbing a sharp knife, Vasubandhu was then about to cut off his own tongue with it.

Asanga, who with his divine powers saw from afar that x his brother had a knife, reached out his hand and grasped his brother’s hand so as to never let him go. Between the brothers lay a distance about three yojana, the length of a three-day march of the royal army. However, Asanga immediately came to Vasubandhu, stood by him, and remonstrated him. “You are now cutting your tongue to compensate, the height of stupidity. Originally, the teachings of Mahayana Buddhism preach the truth. All Buddhas glorify and all philosophers revere them. Those were the teachings that I have wanted to bestow upon you. You should immediately stop what you are about to do, and learn them. Cutting your tongue will never mean your sincere regret. It is with your tongue that you defamed Mahayana, but you should use it to praise Mahayana now. Finishing his words, the elder brother philosopher vanished from the sight of his brother, Vasubandhu, who followed his elder’s words, stopped trying to cut off his tongue and rejoiced. 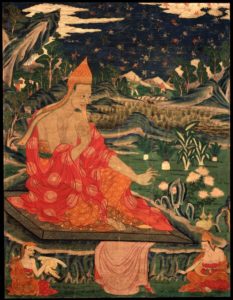 Subsequently Vasubandhu visited Asanga in his country and learned all Mahayana teachings so smoothly, as though water were being transferred from one jar to another. The elder brother was a wonderfully good teacher. Later, the younger brother completed a treatise on Mahayana consisting of more than 100 chapters and spread their teachings across the world. This is the story of Vasubandhu Boddhisatva, who has been devotedly worshipped by people around the world.

Once upon a time, there lived a Buddhist philosopher called Nagarjuna in western India. He had infinite wisdom and bene...

Once upon a time, there lived a Buddhist philosopher called Dharmapala Bodhisattva. He was a disciple of Vasubandhu Bod...
スポンサーリンク
巻二第十三話 白い衣をまとって生まれた女子の話
巻二十第二十六話 乞食僧を打って圧死した男の話