Once upon a time, there was a Buddhist philosopher, Nagarjuna, in India. He was merciful and rich in wisdom. Before he became a monk, he had been committed to heathen scriptures.Then,he and two men invented medicine that made a subject invisible. The medicine was believed to be made from dried mistletoes. Once the medicine was placed into bundled hair, its body disappeared as if wearing an invisibility cloak. 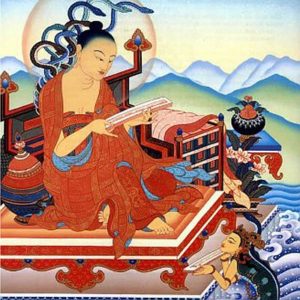 The three broke into a castle and raped many queens. The queens feared being molested by the invisibles, so that they told their king, “in these days, someone who is invisible gets near and molests us”.

Since the king was wise, he figured out what was happening. He said, “somebody must have made medicine to become invisible and been doing such things”. And he said,

“Strew powder on all over the castle! Even they are invisible, they cannot hide their footprints on powder. Follow the tracks!”

He had a large amount of powder brought and strewed all over the castle. The powder was for whitening skin.

Afterward, when the three broke into the castle, they left footprints on powdered floors. And then, the king had many men with a sword come in and slash at places with footprints. Two were killed. Only Nagarjuna survived. He was trembling under a torn piece of queen’s dress. He strongly prayed for his life. It may be due to his prayers, after two were killed, the king said, “just as I thought, intruders must have become invisible. They should be only two.” And he had slashing stop.

After that, Nagarjuna sneaked out of the castle. He realized that it was sinful to commit to heathen scriptures. And he became a Buddhist monk and changed his name to Nagarjuna. Nagarjuna has been worshiped ever after.

Once upon a time, about 900 years after the Buddha’s death, there lived a Buddhist philosopher called Asanga Bodhisattv...

Once upon a time, there lived a Buddhist philosopher called Nagarjuna in western India. He had infinite wisdom and bene...

Once upon a time, there lived a Buddhist philosopher called Dharmapala Bodhisattva. He was a disciple of Vasubandhu Bod...
スポンサーリンク
巻二十第一話 天狗が海に不思議な音を聞いた話
巻一第四話② 愛馬とともに城を出た（釈迦伝08）