Once upon a time, there lived a Buddhist philosopher called Nagarjuna in western India. He had infinite wisdom and benevolence and compassion. Around that time, there lived a philosopher called Aryadeva in western India. He also had profound wisdom , and a strong wish to disseminate Buddhist teachings.
One day, Aryadeva heard about Nagarjuna’s infinite wisdom and wished to learn Buddhist teachings from him. He then started walking towards far off western India.
The journey to see the master was indeed long. He had to swim across a deep river, cross a worn-down wooden bridge, climb a rocky mountain, walk over a craggy shore, and travel through a vast wilderness. Sometimes he had no water and sometimes no food. He tearfully walked this unendurable path in order to learn the Buddhist teachings he did not yet know and spread them. After several months of hardship, Aryadeva finally reached the temple where the master Nagarjuna resided. 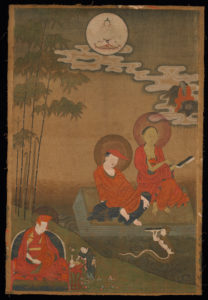 Nagarjuna(in the center) and Aryadeva (on the left)

He stood at the temple gate to ask someone to show him to the master. He then encountered a disciple entering his master’s room. The disciple asked Aryadeva.
“Why have you visited this temple?”
“I have something I would like to speak about with the Master.”
The disciple heard this and conveyed Aryadeva’s words to Nagarjuna. Then the Master sent another apprentice who he thought was the right one for the job who went to Aryadeva and asked, “Where have you come from?”
Aryadeva said, “I come from central India. There I heard about the Master’s infinite wisdom. However, it has really been a long and difficult journey, and not one easily traveled. Moreover, I am old, exhausted, and I don’t think I could keep walking even if I tried to. Nevertheless, I simply wished to learn and disseminate the teachings of Buddhism. And I believed that I would surely reach here if I were meant to spread the teachings of the Buddha, , so I walked all the way here without heed for my own life.”
The second disciple listened to Aryadeva humbly and conveyed his words to the Master. The Master asked, “Is the priest young or old? What does he look like?” The disciple answered, “He looks very noble. Just as he said, he must have traveled a very long distance and has become emaciated. Being too exhausted to stand up, he is now sitting down by the gate.”
The master took a small box, filled it with water and told the disciple, “Take this box to him.” The apprentice then handed the box to Aryadeva.
When he found water in it, Aryadeva pulled out a needle from the collar of his robe, put it in the water, and returned the box to the apprentice. When the Master looked at the box, he found a single needle in it. He was amazed and shouted in wonder. “Here is one of true wisdom. I must apologize to him for asking him so many questions without inviting him in.” The master cleaned the whole quarters, prepared a space for Aryadeva, and told the disciple to show him in immediately.
The disciple asked the master, “The priest from another country did not mention any reasons for his visit. When the Master asked him about the purpose of his visit, he revealed it. Then you gave him a box filled with water. Although I thought the box was to quench his thirst after his long journey and passed the box to him, he did not drink the water but pulled a needle out of his robe’s collar, put it into the box, and returned to us. Then I thought the priest presented the needle to you Master, but as soon as you found it, you said you were sorry for being rude to him and showed him in immediately. I do not understand what happened at all.”
The master smiled, “What shallow wisdom you have . The priest from central India came all the way to visit me and said he wishes to disseminate Buddhist teachings. What I meant by handing the box filled with water to him without words was “A water-filled vessel, however small it is, can reflect any scenery in it. Although my vessel of wisdom in myself is as small as the box, picture here the whole scenery you have in yours.” The priest saw what I meant and put a needle into the water. His needle means “although my wisdom is as tiny as a needle, I wish to reach the bottom of your vast sea of wisdom.”
You have served me for years, but your shallow wisdom has not allowed you to understand my inner thoughts. The priest who travelled from far central India understood them well. Between one man with wisdom and one without wisdom, there is a big difference.” The Master’s words left the disciple feeling broken in both spirit and heart.
As the master told the disciple, the priest was shown into the temple and met the Master. He was taught and learned many teachings from the Master, as though water were being transferred from one jar to another. He then brought these teachings home to pass on.
One man with wisdom and one man without; one who understands things immediately and another who takes time to understand things. It is said that the difference between the two appears manifestly.

Once upon a time, there lived a Buddhist philosopher called Dharmapala Bodhisattva. He was a disciple of Vasubandhu Bod...