Once upon a time, there lived a Buddhist philosopher called Dharmapala Bodhisattva. He was a disciple of Vasubandhu Boddhisatva. He endeavoured to spread Buddhist teachings and had wisdom more profound than that of others. His sect, therefore, had numerous disciples.
Around that time there also lived a philosopher Bhāviveka, a disciple of Aryadeva. He was also a man of profound wisdom and had numberless disciples in his sect.
Bhāviveka established a view that everything in the universe is void, while Dharmapala established a view that everything in the universe exists. Hence, the philosophers argued and both insisted on their own views as truth. Dharmapala said, “No one can settle which view is correct. We should inquire with Maitreya. Now let us ascend together to the Tushita Heaven to ask the future buddha about this matter.” However, Bhāviveka disagreed, “Maitreya is a bodhisattva who still has a fragment of worldly desire. We should await until he becomes a buddha.” Their argument never ended. 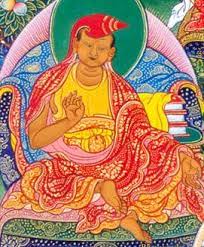 Presently, Bhāviveka, after purifying himself in water in front of an image of the bodhisattva Avalokiteshvara, began abstaining from grains and recited a sutra called the follow­the­heart dhāraṇī. Under oath he swore, “I will remain in this world with my present self and wait to see the bodhisattva who would descend from the heaven to be born as a buddha here.” He continued praying for three years.
Then Avalokiteshvara emerged and asked Bhāviveka,
“What have you been praying for?”
Bhāviveka responded,
“I desire to abide in this world and await Maitreya.”
Avalokiteshvara said,
“Human life is ephemeral and never everlasting. You shall instead build deed of charity here and wish for a birth in the Tushita Heaven.”
Bhāviveka replied,
“I have one wish. I will yet abide and wait for Maitreya to manifest in this world.”
“Well then, go to Buddha Vajrapani in the rock of the mountain where the castle of Dhanakaṭaka stands, and entreat Maitreya to appear by reciting the sutra of Vajrapani Dharani. Your wish will be fulfilled,” Avalokiteshvara revealed to the philosopher. 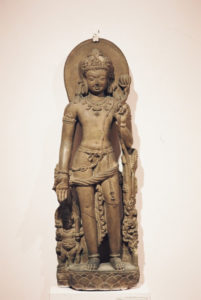 Following the revelation of Avalokiteshvara, Bhāviveka proceeded to the rock and recited the sutra with a mudra, praying for the buddha’s manifestation for three years.
Eventually, Vajrapani appeared,
“What wish has made you entreat me in this way?” asked he.
“I abide in this world to await the manifestation of buddha Maitreya, and am praying here according to the revelation by Avalokiteshvara,” said Bhāviveka.
Vajrapani imparted an idea to him,
“In this rock is Asura’s palace. The rock wall will open of its own accord if you pray following the Asked given rule, then enter and stay in the cave, so that you can await Maitreya as a being in this world. “
Bhāviveka wondered,
“It would be too dark inside to see outside of the rock. How could you tell when Maitreya manifests as a buddha?”
Vajrapani said,
“I will come to let you know when he does.”
With these words of Vajrapani, Bhāviveka fervently devoted himself to praying for another three years. When he hit the rock while incanting the spells with mustard seeds thrown in a sacred-fire pot, the cave opened its mouth. 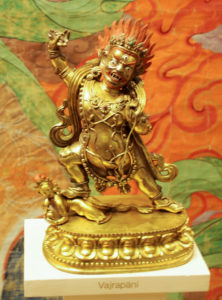 Even among tens of millions of people who saw this cave, none would venture into it. Resolutely standing before the rock , Bhāviveka called to the crowd,
“I have long been praying to entreat the manifestation of buddha Maitreya, but now I will enter this cave to await him there. Anyone who share this aspiration with me shall step into the cave with sincerity.”
The crowd shuddered at his words and murmured to each other,
“This is the cave of venomous serpents. Anyone who enters here will lose his life.” Bhāviveka still invited them to enter, and found only six people who followed him and disappeared into the cave.
Then the cave closed as it used to be. It is said that some people regretted not entering the cave while others feared it.

Once upon a time, about 900 years after the Buddha’s death, there lived a Buddhist philosopher called Asanga Bodhisattv...

Once upon a time, there lived a Buddhist philosopher called Nagarjuna in western India. He had infinite wisdom and bene...
スポンサーリンク
巻二十第三十一話 母を責めて狂気に死んだ男の話
巻二十三第十八話 尾張の小女の怪力話